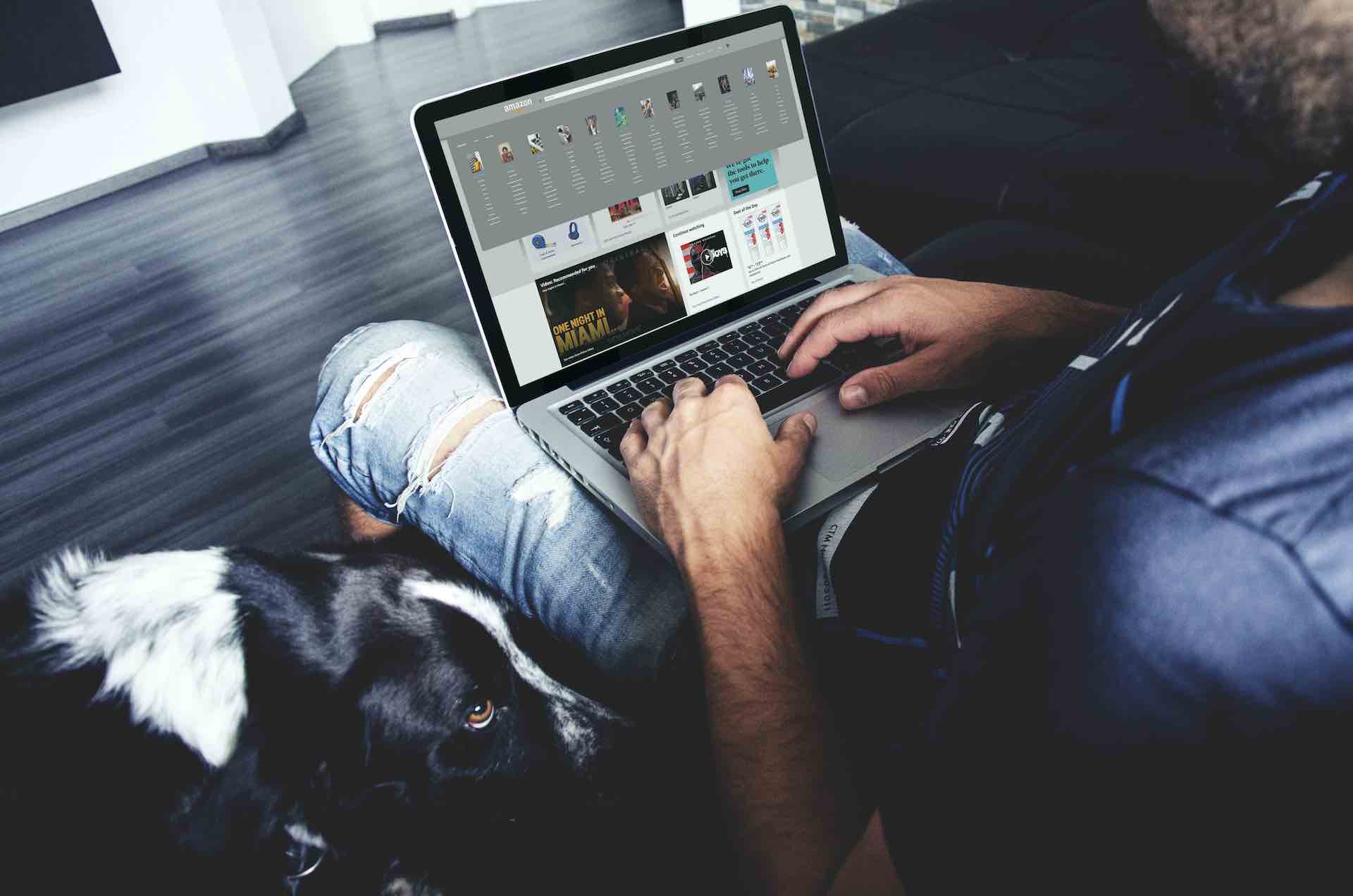 Twenty-three percent of online shoppers visit Amazon for inspiration without a specific product in mind for purchase. However, Amazon provides little support for browsing by category. Menus of ambiguous categories often provide a literal discovery experience that can lead users to unexpected and interesting buys they may not have otherwise considered.

With high abandonment rates and more than a quarter of hundreds of millions of users intent on browsing, even minor improvements in discoverability can have significant impacts.

To arrive at a user feedback based solution for improved category browsing I worked through a complete user centered process including in-person task based usability testing of Amazon.com. Having confirmed the need for a category based browsing solution, an interactive prototype was developed to offer users a simplified and more familiar interface.

I acted as a UX team of one for this research while also consulting with other UX professionals in my network when considering the topic of discoverability, search and browsing in e-commerce. 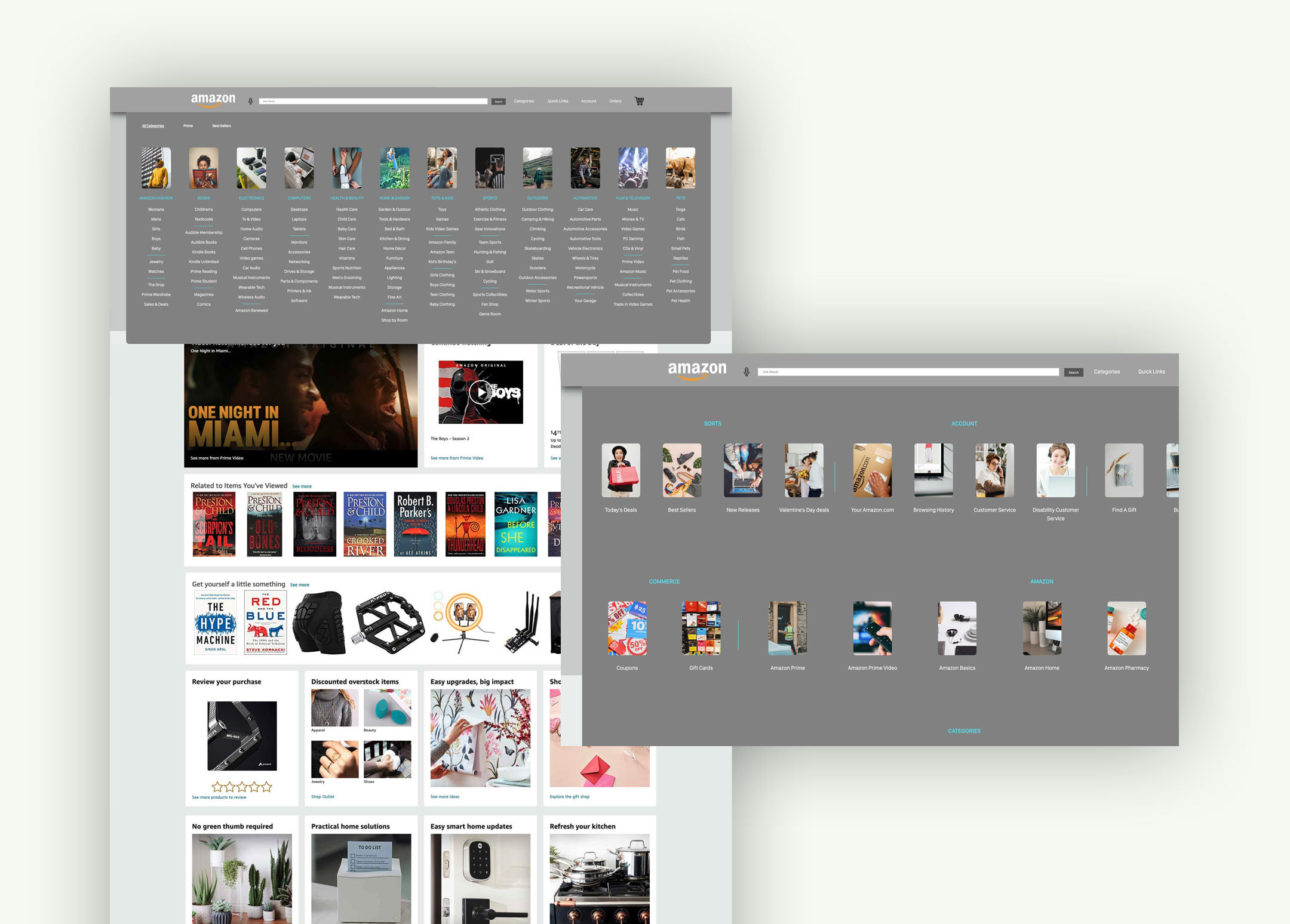 The first step in the redesign of Amazon's interface was to learn about their business objectives, and users

Amazon.com has achieved a conversion rate of 13% which is almost seven times the industry average for ecommerce. Prime members buy an average of $1,400 a year worth of goods at a total number of 103 million as of March of 2019. Regular customers spend $600 per year with the most recent data showing their numbers at 310 million according to Statistica. This makes even small improvements in search abandonment rates far from insignificant.

Prime Members convert at %47 vs %13. A one percent increase in prime member annual spend would be $140 a year, at one million customers is $14 billion in additional sales per year. For non-prime members, it works out to $1.8 billion for a total of $15.8 billion per year.

Amazon prime sign-ups have slowed since their 2016 peak. As the correspondence between shopping preferences and prime benefits begins to plateau, improvements in user experience become more central to continued efforts to drive growth in prime subscriptions and the windfall difference in annual sales for each membership.

Optimizing search is optimizing conversions. In 2017 Amazon became the primary search engine for product searches surpassing google. While selling products in every conceivable category is Amazon’s core strategy, the current site offers unfamiliar patterns and affordances for browsing. Browse Abandonment Rates Are As High As %75 of all visits.

Knowing that Amazon’s UX is search-driven, I planned and conducted research to improve the balance between search and discovery

Great e-commerce search and discovery includes powerful and intuitive browsing experiences that can easily work without the search bar. Netflix, for example, is entirely discovery-based.

Amazon has gone a different direction. Their solution for discovery is implemented as predictive search in a way that mixes ambiguous category suggestions, with exact product suggestions. This cuts against a number of heuristics best practices. 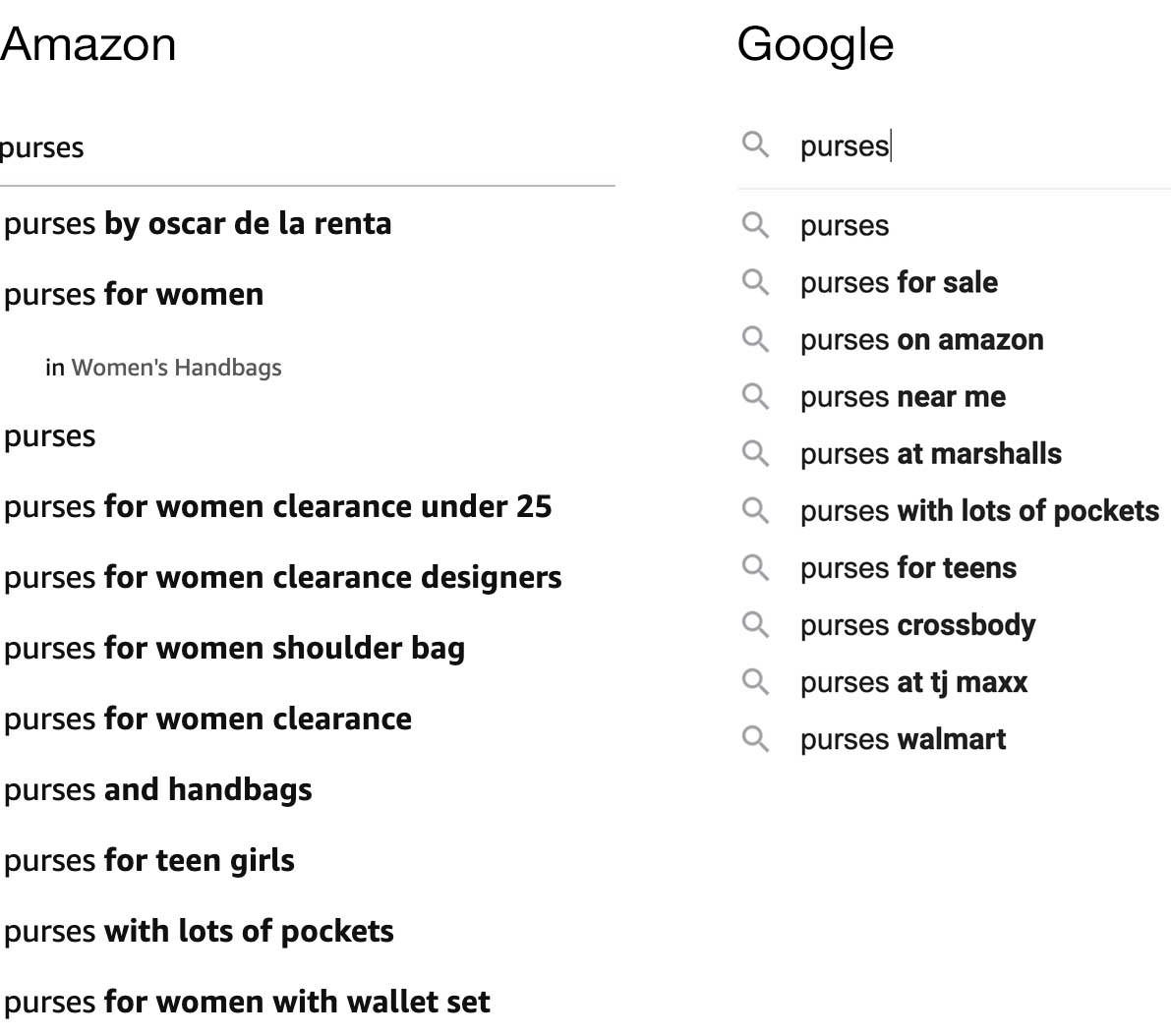 To learn how users are coping with the problems identified by heuristics evaluation I established high level goals for qualitative research.

Study participants were asked to carry out typical tasks at Amazon.com. Video and audio of the screen and the participant were captured and transcribed for analysis; how is the user going to operate the thing you are to design? It records descriptions of the users’ tasks to make them clear.

Amazon's landing page presents the user with a difficult gulf of execution for those who do not know in advance the exact product they want. The discoverability of features for browsing by category is difficult.The menu left of the search field is unfamiliar for users. Study participants could not understand what actions they were taking, or what to expect when using it.

Amazon’s category search is not displayed on the landing page. There is no UI option “Browse by category.” Browse by category is an available option but only accessible from a hamburger menu located in an unfamiliar location (upper left).To what extent is this invisible category navigation driving users to search “laptop computers” rather than browse electronics/computers/laptops?

Using the menu for search within categories is a time wasting exercise which yields the same results as a text query for that category.

Browse category results pages mix search results with navigation and ads. This defies the expectation that the category “laptops” will yield a results page of laptops.

1-16 of over 90,000 results for "laptops" are presented with no functionality for a grid-view.

To better support the user intent of discovery, and drive better conversions, I coded heuristics insights, notes and insights from task recordings by cognitive principles of interaction design

Amazon does not offer an experience of browsing navigation categories by scanning an extensive, organized, exhaustive list of categories. Even before verifying with user testing, most users never considered using the fly-out category menu.

The best signifier for the customer interested in shopping by browsing categories would be the term categories accompanied by an icon. Amazon currently has only the word "All" left of the Omni bar. The hamburger menu is understood as a sign for "open menu," which is out of place on the desktop where nav categories are present.

The current site constrains user's choices for browsing in several ways. The dropdown category search offers a few of Amazon's categories. The hamburger menu also limits options with few categories for browsing. When users arrive at a browse category page, they find numerous personalized recommendation threads that can be useful.

Feedback in interface design for the web and mobile predominantly takes the form of animation of interface elements. Amazon's menus for browsing offer no interaction design animation. These elements blink into view and out. They don't degrade the site's usability but represent a missed opportunity for improved engagement that contributes to more excellent conversion rates.

Feedback was deconstructed and entered in tables for coding and summarization

Most research participants interpreted the instructions to look for something in a category like “kitchenware” or “shoes” as a directive to conduct a category search. However, only one made it through the sequence of selecting a  “category” and viewing category results.

A hamburger menu on the left is an unusual placement. These menus are placed on the right top corner on mobile for easy one handed operation.

Replace this menu with a more familiar menu located in a primary, global navigation across desktop and mobile views.

What navigation Amazon does have for browsing categories is difficult for users' initial evaluation of possible actions. The drop-down immediately left of the search field is an uncommon feature. No one could discern a difference using it would make. Were they searching within a category? No one knew for sure what to expect from the results they would get. The more common problem was that this menu was not even seen and or ignored by participants.

Replace this menu with a more familiar menu located in a primary, global navigation across desktop and mobile views.

Amazon is also displaying a ribbon of quick links across the bottom of the search bar which cuts against Nielsen Norman's eighth heuristic. Every extra unit of information in an interface competes with the relevant information units and diminishes their relative visibility.

Amazon has so many service businesses and other links for the site that there is simply a limit to how many and which links can be useful above the fold without hurting overall usability.

Placing these links as a global primary navigation mega menu would mean they are removed from the initial step of the users gulf of evaluation.

Having identified the behaviour in need of support, the problem users are having, and the cognitive principles at issue I was prepared to prototype a solution

It was surprising to see how often users experience moments of deprecated self-confidence when shopping Amazon. Given the importance of competence as a component of positive moments, it seems like a terrible oversight by Amazon. It was also eye-opening to see just how many times users repeated their searches. Some returned to the Omni bar to recover from navigating someplace they had not expected, and others returned to enter different search queries.

These are common and thoroughly understood problems users face when searching. While search is good for finding something specific when there are too many items to browse in a timely manner, without sophisticated architecture for browsing categories of items, users miss out on the rich and entertaining experience of potentially learning about items they had not considered.

In a culture practically anchored in shopping as a form of entertainment, there must be some reason why the architecture is forcing searches over browsing. It could be that all of the user data generated by users entering queries serve some practical value that translates into profit for Amazon. Without looking under the hood, it is impossible to say. It is safe to say that there is no shortage of talent on the UX team at Amazon, and if they wanted to facilitate faceted search and browsing from a mega menu, they would.